I made a train journey recently that left me near foaming at the mouth after a train which I had paid £120 for a ticket on left the station despite having plenty of room for me and my bike. 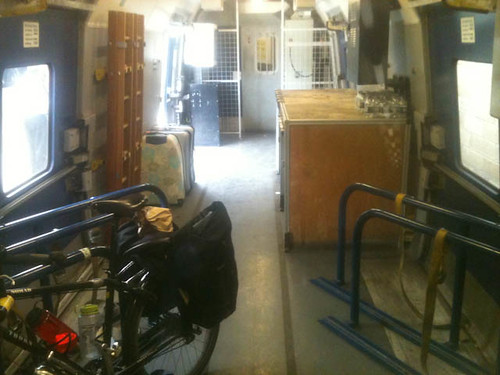 I have read articles that complain about taking bikes on trains only for a commenter to point out they failed to comply with clearly stated rules which the author has failed to mention. So, I want to start by admiting my failures:

Without these two things I would have got on the intended train. No outrageous injustice has been committed here, the train staff were merely following the rules. I calmed down and thought a while longer about the subject in more general terms.

I do appreciate that I’m allowed to carry my bike on the train for free in the first place – the often praised cycling holy grail The Netherlands doesn’t even offer that – and for the most part it manageable with a bit of knowledge and advanced planning.

I’ve criticised myself and praised the train service – however I have some issues.

Firstly I have to know which train company is running the route I’m on (and it may be more than one) and then I need to find out their cycle policy. atob.org.uk have a comprehensive guide to taking bikes on trains which details no less than 29 different train companies policies.

Some don’t allow bike reservations, some require them, and for others it’s optional. East Coast trains have the only website which lets you book a bike reservation at the same time as the train ticket – otherwise it’s a phone call or a visit to the ticket office.

The main thing you need to know is do I need a reservation and how do I go about getting one. I found the East Coast cycle policy not clear enough – their wording is

what is a ticket? my main ticket or a bike reservation? nowhere else is a “bike reservation” referred to as a “ticket” so I assume it means my actual train ticket. Half way down the page it then says

you could claim this is saying you cannot travel without a reservation but it’s very simliar to the sort of wording you would see when something is trying to get you to book when you don’t need to – be sure to book ahead to avoid disappointment. It would be much clear if the first line was you cannot take your bike on the train unless you have a bike reservation.

A man from East Coast pointed out to me that if they let a bike on without a reservation then they might not be room for a reserved bike further down the line – this is a real dilemna but not unsolvable. Three possible solutions:

Alex Veitch (Integrated Transport Manager of the Association of Train Operating Companies, Atoc) has a defeatist attitude in a comment on a Guardian article about the problems with the booking system

Not all guards are made equal

Too much depends on how nice the guard is.

Sometimes discretion is built into the policy and sometimes the guard is willing to bend the rules a bit.

How can I plan my journey if it depends on how nice the guard is?

**Fair and sufficient provisions for bikes should be written into a policy clearly and unambiguously across the train companies.
**

I’m a very loyal train user – I don’t have a car and don’t intend to get one and I spend a lot on time and money on trains. I enjoy it and try and encourage other people.

Train staff are frequently not as helpful as they could be and sometimes outright rude. On the East Coast train out of Edinburgh I had to walk 3 carriage lengths to load my bike, unclip my panniers, and walk back 3 carriage lengths – even if I’ve meticulously planned my approach that is still long enough to end up being shouted out by a guard to hurry up – and it’s stressful.

Of course there are many lovely train staff who go beyond their duty to help cyclists but too much of the time I feel like I’m an annoyance to them.

Train staff should be briefed on the likely issues cyclists face and be willing to help out where they can.

There isn’t enough space on most modern trains

Long distance Virgin trains have space for 4 bikes – that is pathetic. There are generally two types of trains – big trains with big engine cars at each end and small trains with a small number of self propelling carriages. The small trains generally manage to take more bikes (and allow more akward luggage) than the big trains.

The Virgin trains with space for 4 bikes are very new and have been designed deliberately this way. The East Coast big trains have space for 5 bikes but are older and it’s just that they have 5 bike racks inside a vast mostly empty guards waggon, they could easily take 10.

Think of all the space that is allocated to 1st class seating – it’s often close to empty on otherwise crowded trains.

I don’t want to lock my bike at the station!

Recent bike/train policy seems to be focussing on getting you to lock your bike at the station (£14 million was spent on 10 “cycle hubs” at stations and this view is favoured by Alex Veitch in a comment) – this is fine in approximately three cases:

I know I’m not a typical person but I can get anywhere with the bike/train combination – the only way I can do this though is by taking my bike on the train with me. Trans-Penine Express themselves point out that More than 60% of the population live within a 15 minute cycle ride of a train station.

There are yet more niggles: East Midlands bike reservation requires downloading and emailing a form 48 hours in advance, on short platforms the bike storage is sometimes totally off the end of the platform, and rail replacement services cannot carry bikes.

These things are annoying for me personally – they make me feel like the world isn’t made me for. Yet by cycling I’m keeping fit, meeting more people, reading more, reducing pollution, reducing congestion, and enjoying it. I’d love more people to experience this but at the moment it seems to require a particular dedication to the cause of cycling to endure the hurdles. I wish we could make cycling seem a more normal thing to do and that would involve making it normal and easy to put your bike on a train.

The most positive thing out there at the moment is Northern Rail’s Cycling Strategy – I only hope something like this can become more widespread.

Who wants to start a campaign?