6 months on the road, a retrospective

I left London around 6 months ago now without much of a plan or probably much apparent reason why I would do such a thing. I was living in shared accommodation which was very nice (a large warehouse space), I did work which I found interesting and paid well, I had nice friends to do nice things with.

However I had a niggling feeling something had to change, my thoughts were that I knew I wouldn’t want to be living in shared housing forever (it’s my main problem with shared housing – everybody is just waiting till they start their “real  life” rather it being their proper home). I’m also not so motivated by regular career progression or gathering many more items.

Something had to change at some point, and so why not now?

I often find it hard enough to make day-to-day decisions – should I go to the shop first, then have coffee? what about a cycle ride? do I need to take my coat with me? what about the waterproof trousers? should I text Lucy or shall I go on my own?

Making decisions about my entire life could be near impossible given this, I actually find it not much different – the bigger the scale of the decision the less detail I need; when planning a new section of my life I only really need a broad sweep of an idea. I already (extensively, maybe obsessively?) write rambling notes about many things – here is part of the original note where I was thinking about these changes might be: 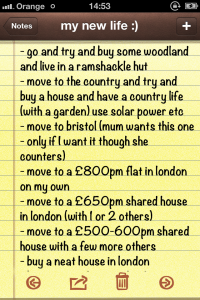 Quite wide ranging options – and thats only a snippet of the document; the full note (unpublishable due to likely embarrassment at revealing too much of my inner mind) had many more considerations, full time work job prospects, possible freelance projects, evaluations of my existing clients, most important friends, and favourite activities.

Writing the ideas on paper/file helps me to visualise what they might be like, it’s a great exercise to do and you can really let your mind go as wild thinking about new lifestyles. As I wrote the next bit it immediately struck me as a good idea: 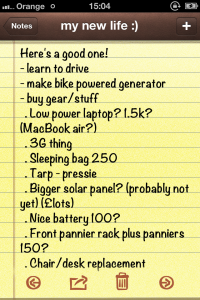 Some of these things didn’t happen – I never managed to learn to drive (I failed at even applying for a provisional license ) and the bike powered generator was going to be too heavy. The rest of things all occurred though (just underneath that section is says “Leave on bike!”).

The process of decision making I usually take is something like – step 1: make plans, step 2: do plans, step 3: get lost and confused and try and find my way back to step 1 (explained in a post I wrote a few years back).

Once the plan is made it simply needs executing – and so this was my next few months, investigating solar power (and charge controllers giving me hassle), going on a bike powered generator workshop, geeking out on camping gear, buying a new custom touring bike, finishing up work projects, preparing my old (heavy) laptop for selling, moving stuff I want to keep into storage, etc.

Actually on the road

I (literally) cycled out the front door with a heavily loaded bike on 29th June (according to the timestamp on the photo) not knowing where I would stay that night, let alone the rest of week/month/year. That was an amazingly liberating feeling and the cliched phrase “the first step is the hardest” is absolutely true.

I had a few “principles” at the start of the trip (UK based, no agenda or destination, trying to get involved in “things” along the way) but I’d happily change these if they didn’t work out. I had allowed for the possibility that at some point it would be horrible and pointless and I let myself have the option that I could just come back to London and carry on where I left off. I wanted to get away from excess pressures and expectations in life, not add more.

The trip started out much like a regular cycling holiday – step 1: cycle, step 2: eat some food, step 3: find somewhere to stay, step 4: goto step 1. I struggled with feeling lazy if I didn’t cover a reasonable amount of ground each day (50/60/70 miles) which is exactly what I was trying to avoid (I’ve since triumphed in this regard, 70 miles in a week seems a long way now). I started to set myself challenges to engage with the local population: walk into a pub and try and find someone who’ll let me camp (success rate = 2/2), knock on a farmers front door and ask to stay (success rate = 0/1, got scared off by a barking dog) – however these strategies didn’t catch on as it required much more effort and I’m happy wild camping anyway.

Another idea was visiting housing co-ops or communities (via diggers and dreamers listing or radical routes members list) – I’ve only visited three to date as they need to be on my route and available for visitors (and reply to emails/phonecalls!) but all of them were great and I hope to visit more as I continue travelling. Co-housing or communities where it is family units were harder to visit as there may not actually be a “centre” of it, it’s just a collection of people living close by. Housing co-ops (multiple people living in one household) are much more suited to accepting visitors though and both Nutclough (Hebden Bridge) and Cornerstone (Leeds) put me up for a few nights resulting in a lovely stay and meeting some interesting people I’ll hopefully keep in contact with and visit again.

I crossed into Scotland at the end of August (but shortly after went back to London on the train to do some work). I was back up in Scotland at the beginning of October to continue the trip. Everything changed as I started travelling in Scotland and I slowed my pace dramatically to take everything in (and avoid falling off the top). I fell in love with Scotland and it’s provided me with some of the most spectacular scenery (such as sections of the West Highland Way).

I started taking inefficient wiggly routes (like round the Ardnamurchan peninsula) and stopping for more than one night in each place. I also had the idea of contacting various WWOOF hosts to see what they had to offer – I haven’t done any proper wwoofing as yet but did visit a few places with a view to coming back in the future; as I’m very mobile I can just pop in to some of them without going too far from my route or causing anybody much hassle.

I spent a couple of weeks visiting Rum and Eigg and was particularly taken by a bothy on Eigg. I barely left this general area for a month or two having settled for the Christmas period in a nice lodge on the mainland.

For the New Year period I left my bike in Arisaig and took to car/train/foot and had a very enjoyable frenzy of social activity with some Londonites over in Aviemore followed up with a week or so in Edinburgh. I am not inclined to cities at the moment though and as lovely as Edinburgh is, my heart is not there.

Travelling back to the Arisaig (west coast) from Edinburgh (east coast) seemed too easy/boring/simple by train so I planned to walk back – I’m not very good at walking though it seems and got a foot injury after covering 50 miles or so which meant I had to abandon that idea. I replaced it with my first attempt at hitchhiking – which was remarkably successfully and got me a significant of the way back.

So, whats the big idea?

Along the way people ask me variations on the question “why are you doing this?” and I variously answer one of:

“finding the meaning of life” (when full of beans)

“pottering aimlessly around the country” (when beans have run out)

“enjoying the opportunity I’ve had to take some time out of regular life, regular life never lets you really pause, you have to work 5 days a week, then the weekend is full of things to do then it’s monday again, there’s almost no time to read all the books you want or learn the things you want, or just be still and do nothing for a while, it’s all about ladders, the housing ladder, the career ladder, but I’m wondering whats at the top and why am I climbing anyway? I just wish the industrial revolution could deliver on it’s big promises and make life less hard work so we can relax a bit more why aren’t we all working 3 day weeks now we have all these fancy factories and labour saving devices … [and so on until their eyes have a distant glazed look and they’re starting to walk away from me]” (when I haven’t seen anybody for a while).

I’ve had a lot of time for pondering but still don’t actually know what the question is or what I’m after – I’m going to have to live with this situation as I think that is just how I am. However I have made several distinct discoveries about myself –

My main productive asset is my computer-based skills

I had thought about turning my back on my computer “career” in favour of “earthier” things. All the “earthy” people I have visited though, almost without fail, have some use for my computer skills and often struggle with them. Computers are an unavoidable part of many peoples lives and this seems unlikely to be changing, they are not bad and I actually enjoy working with them (for the most part). I’d love to help move them (more specifically, software) in a direction to make them more purposeful, useful, friendly, productive… especially for people that don’t want their life to revolve around a computer.

The work and lifestyle possible with working with computers also is very much in tune with me – computer people tend not to be bothered with formal clothes, they like to get straight to the point, tend towards using the later hours in the day, and remote working is often not a problem.

I love learning about History

I started wanting to learn and think about what we (humankind) should do in the future. This led me to thinking about the past and I figured learning about 20th Century Britain might be the most useful bit – however this period just references previous history and to get the bigger picture I’ve had think further and further back. When we diverged from apes now seems the most useful starting point. I’m not going to spew out my half-baked ideas now though!

It’s been absolutely fascinating and like a gigantic and complex novel which you can keep reading more and more detail and other viewpoints on the same events – it’s a lifelong journey of learning which I’m glad I found now. Adding the 4th dimension to exploring the world (time) really opens up things that are impossible to grasp just by looking at the current state of affairs. Learning about history turns a random collection of events, ideologies, viewpoints, nations, people that are currently in existence at any one time into an interweaving journey that provides insights into how humans and cultures work that would never be possible by any study of the current world or by purely intellectual conjecture.

I better finish this post and press “Publish” as I’ve horribly neglected any readers (if I have any left now, sorry!) – I’m continuing the journey and heading for more west coast island exploring (Arran, Mull, Barra, the Uists, Harris, Lewis) and back into Ullapool at some point in the future. The weather is showing signs of improvement (although a bit on the chilly side now), and the days are getting usefully longer again, my spirits are refreshed, and motivation high(ish!).