I spent 5 days with Occupy Edinburgh in The Meadows. I had cycled from Perth that day after a lazy morning because I was asuming there weren’t many hills, there were, and the sustrans route wasn’t doing much to avoid them. I arrived into Edinburgh at around 9pm (long into the darkness) planning to turn up at the protest camp and see if I might be able to stay; the other option was to continue the ride a bit further down to mortonhall campsite, or to pester a friend at short notice.

I didn’t really know what to expect as I cycled across the muddy field to the camp – it’s hard to even see the encampment at night time from the paths around the park – as I arrived the occupants had heard me approaching and called out to me, they get a fair bit of interaction from passer-bys of good and bad nature so are wary of noises outside. I popped inside the tent to find two people huddled in blankets in the cold, they were immediately friendly and welcomed me to stay and helped me carry my many bags into the main tent. This is a remarkable thing to occur in the middle of a large-ish city – a total stranger arrives and is immediately welcomed. I think my touring bike and received pronunciation accent mark me out as an unlikely criminal or trouble-maker but I imagine I would have been welcomed without these things. 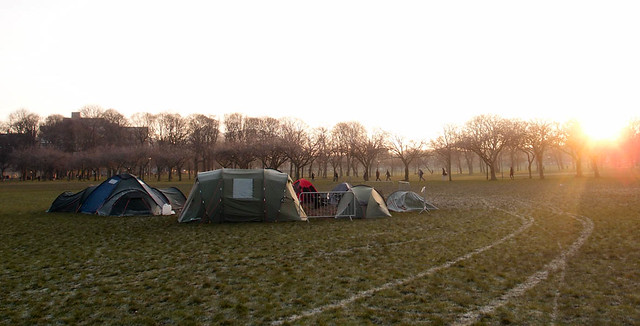 A beautiful morning over the Meadows

I don’t really want to write about the politics of the Occupy movement, that will be covered elsewhere in more detail with better information and I have to admit that having spent 5 days on the site I don’t actually know much about the aims of Occupy beyond the obvious anti-banking sentiments you can see in newspaper headlines. This isn’t because there was nobody who might be willing or able to answer those kind of questions but because I didn’t ask them – I know many obvious questions get asked over and over again (“what do you think you’ll achieve by camping here?”, “have you got an alternative to capitalism?”, “how have you got time to sit around all day?”, “have you got a job?”) and I’m keen not to re-ask them (in the same way I would avoid making a joke when meeting someone called “Foxy Demeanor”, which is a real name by the way). It’s a bit deeper than just not wanting to ask repetetive questions though – I’m a persistent observer of life and facinated by peoples lives, more so than hearing about high minded largely hypothetical ideologies. My interpretation of the movement is along the lines of: something is going wrong (indicated by the banking crisis) and so something must be done (but not sure quite what) and it must be done now (even if the plan is not well defined). Regardless of anything else that’s enough of a motivate for me to lend my support for a few days.

This doesn’t mean I’m wholeheartedly in support of the movement but I do (like the general population seems to) generally hold the view that banking doesn’t seem quite right when it can fail at it’s game but not actually lose (it gets bailed out by the taxpayer then reverts to business as usual). I’m just not clear enough on how to go about doing anything about it, some of the Occupy people (and many other protest groups) seem to believe they have the answers and are admirably fired up about achieving their aims. I will probably never know what I think should be done about “things” and I imagine if everybody held this position we’d soon get swept up into a system of living that I would not like at all. I am always mindful of Margaret Mead’s observation:

Never underestimate the power of a small group of committed people to change the world. In fact, it is the only  thing that ever has.

I was happy to help out in any way I could and all the equipment I lug around with me is perfect stuff for a protest camp – cooker, cutlery (does “cutlery” include plate and bowls or is it just knives and forks?), lantern, headtorch, camping mat, phone, laptop with internet, solar panel, etc. It became a bit of a joke with one of the protesters that every time she asked whether I had something, I did; no ladies underwear though, but I did have a flag (not as a replacement for the ladies underwear though, to clarify). The other thing I could provide was presence on the site and a bit of variation of company, camping in sub-zero temperatures is not to many peoples taste and the camp was suffering from dwindling numbers willing to stay overnight. 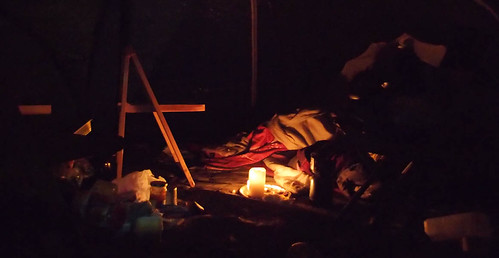 One of the strongest senses I came away with was the extrordinary range of people involved in some way whether they were doing camping, administration, council meetings, media contacts, or logistics – I met students, successful businessmen, homeless people, regular people with day jobs, manual day labourers, quiet introverted people, polite middle class people, baggy jeaned druggy people, presentable middle aged women, alternative worldview “hippies” and so on. Not an entire cross-section of society though, there were no girls plastered in make-up hobbling across the field in high heels, no pinstripe suited guys, no lads about the town (the ones in shirts, jeans, and leather shoes), and nobody without an interesting story to tell (found in abundance across the UK). You can’t win them all I guess. 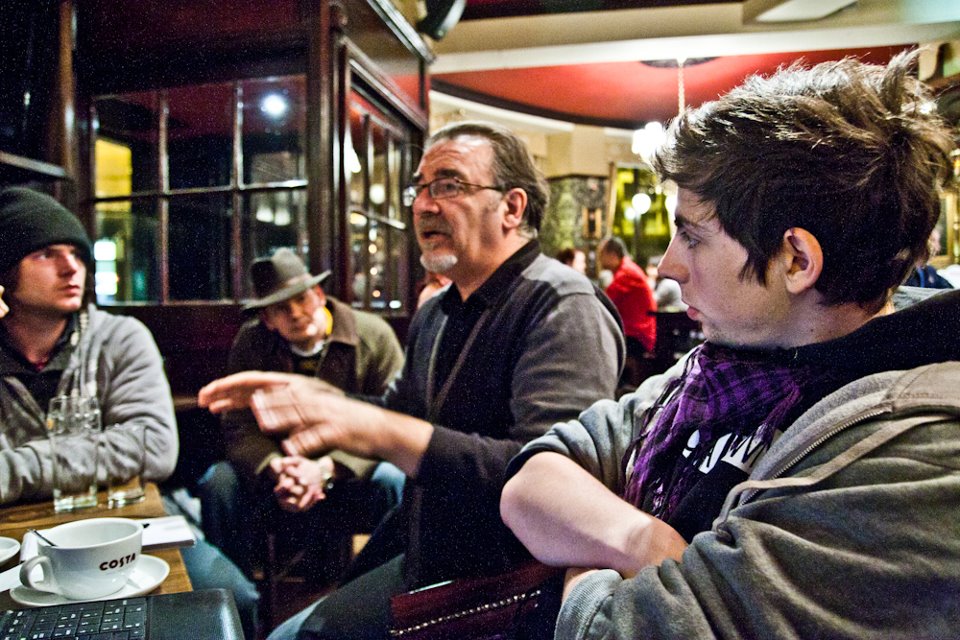 A meeting of Occupy people

An unlikely mix of people for sure, but all united under the banner of Occupy. The range of “world reality” views was equally wide and I’m forever amazed that somebody can descibe to me with absolute certainty about multiple levels of conciousness and that the sun is going to die in a year, or somebody can launch into a conversation involving shapeshifting ideas (something about some people being partly descended from aliens) without first introducing that it is entirely dependent on a fairly uncommon and radical viewpoint that I might not agree with – like when a Christian launches into a conversation about how I should structure my life and morals (which I frequently agree with anyway) without really mentioning the elephant in the room (God). I don’t really mind what people think and don’t believe I could ever be certain enough or have enough solid proof to tell somebody they are wrong and I also don’t feel threatened by their viewpoint so I tend not to engage in these debates much, more ask questions and listen. I’m just forever amazed at the certainity with which people tend to hold these minority viewpoints, it seems as if the further they are from conventional viewpoints the more certain and dogmatic they are. I never saw people clashing over viewpoints though; other than being united by Occupy they are also united by the need to make a cup of tea or eat some food.

Many people come walking up to the camp and of the people I spoke with they were overwhelmingly supportive (of course it is a self selecting group who walk up and I would think people who are opposed to the camp are less likely to walk up), another type of person is supportive of the general aims of the movement but not the method of achieving it. Their concerns seem to be about the state of the grass, the effectiveness of a tent protest, or the fact that the law may be being broken. I spoke at reasonable length with one such person (who also probably had other concerns, being the mother of one of the campers) whose primary concern was the preservation of green space in the city (the criticism was also leveled at my wild camping up through England and lowland Scotland, shhh don’t tell her I’m wild camping now as I write this). Now that the camp has packed up (for now at least) it’ll lose this walk up aspect which I really enjoyed – at times the camp felt like a chat show with a range of special guests appearances each with their unique story and personality. 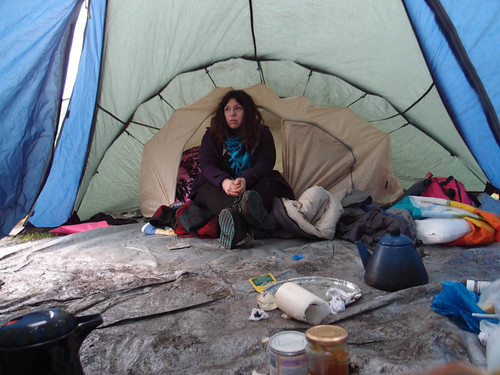 Regardless of any of the campaiging aims of the movement I would love regular life to be as variously sociable as my time was at the camp – much of socialising in the modern world (from my experience) is very structured, pre-planned, and with homogenous groups of people and suffers greatly beacuse of this. Groups of people socialising get split by age, class, interest, financial status and many other boundaries and much sharing of knowledge and experience gets missed. A secure relatively well off person might be able to share some their stability with people who have had more difficult lives, who in turn might be able to put aspects of life in better perspective or help out in other ways. Old people often love to share their wisdom and experiences with people of a younger generation and enjoy hearing how life has changed, it can keep them feeling connected to the world. This is sharing in the best sense – everybody benefits.

_Oh I also wanted to add a humble apology to friends in Edinburgh that I did not visit (or even let them know I was in Edinburgh). I felt horribly guilty the entire time about this. I made a decision that I didn’t want to spend my time making arrangements or using my phone very much and to just dedicate my time to what was happening right in front of me and the needs of the camp. I don’t know if I made the right decision or not, I could have invited people to visit me at the camp and so it feels a bit like I decided to segregate my friends and I’m not comfortable about this. Hmmm. Sowwy ! :( _